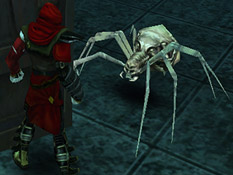 Demon Spiders appeared in Blood Omen 2; Kain encountered them in the Eternal Prison and the Hylden City. They were vicious, pack-hunting arachnids, apparently grown to their unnaturally large size by exposure to Glyph Energy [BO2] When they stood, they were around two and a half feet tall (thirty inches or 75cm). Like many normal spiders, the back section of their bodies was bulbous.[1]

The Demon Spiders preyed on the helpless Eyeless Wretches, and they would attempt to kill Kain too if they spotted him. They would scurry forward to confront him, and take swipes at him with their front legs. The Demon Spiders were not particularly resilient (three to four hits with a weapon was often enough to kill them). However, they were agile, and they would leap sideways to avoid Kain's blocking defence and find a new angle of attack. Kain could not grab or throw Demon Spiders, but he could obtain some blood and Lore from them.