The Device featured in Blood Omen 2. It was an ancient weapon, built by the Hylden prior to their banishment from Nosgoth. Its purpose was destroy all creatures in the land except members of their race, and it comprised of three major parts: the Mass (an animal that could kill beings with a single thought), the Device itself (a machine to attune the Mass' mental energy against the Hylden's enemies), and a network (needed to channel the mental energy from the Device and onto Nosgoth).[1,2]

The Device in Blood Omen 2 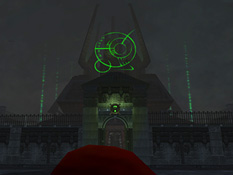 Kain first heard about the Device from the traitor vampire Sebastian, who was confident it would spell Kain's doom. In the Industrial Quarter of Meridian, the Nexus Stone had opened a portal to this "ancient device, deep underground".[3]

Later, Kain visited the Seer to learn more. The Seer told him that the Device had "lain dormant beneath Meridian for time beyond time", but the Sarafan Lord had now "empowered the machine to unleash its destruction upon the land". She agreed to help Kain destroy it, and to this end she offered her blood to him. This granted Kain the Dark Gift 'Telekinesis', enabling him to enter the Device.[4]

The Device, concealed in the Upper City

The entrance to the Device was located in the Upper City of Meridan, "under the very noses of the aristocracy". It was actually quite close to the cathedral where Kain fought Marcus, disguised to look like a rather unremarkable building. However, as Kain used his new telekinetic ability to enter it, this façade melted away.[4]

A short way inside, Kain encountered the Beast. The Beast - who was actually Janos Audron in a devolved form - told Kain it was enslaved to feed the machine with his life. The Device was too large for Kain to destroy, as it was city-sized and descended far underground. However, the Hylden who created it - the Builder - was imprisoned in the Eternal Prison, and he could stop it from working.[5,6,7]

Kain found the Builder. Luckily, the Builder was willing to aid him. Kain learned that the Device was constructed when "two races warred with each other for dominance of Nosgoth", but its network was never finished. The Hylden race had been exiled into the Demon Realm before it could be completed. Kain suddenly realized the true purpose of the Glyph Energy [BO2] pipes installed by the Sarafan; the Sarafan Lord was intending to use that network. The Device was nearly ready to be used. At the Builders insistence, Kain killed the Builder and drank his blood. This would allow him to poison the Mass, and thus render the Device useless.[1,8,9]

Kain returned to the Device after fighting Magnus in the Eternal Prison. The Beast warned Kain that the Hylden he would encounter within were very dangerous. Kain certainly ran into a lot of them as he made his way towards the Mass. They appeared to be performing lots of experiments in the Device, making use of the place until it could fulfill its deadly potential. Humans, obviously slaves, could be found in many rooms, serving the whims of their Hylden masters. Kain also encountered Lesser Demons, and saw that the Hylden had a measure of control over them. The Device was a highly technological environment, and it seemed very alien compared to Nosgoth's usual locations.[10]

Kain eventually found his way into the heart of the Device and killed the Mass. With the Mass dead, the Sarafan Lord's trump card - his master weapon - was gone. By the time Kain got back to the Beast's cell, Janos Audron had regained his natural form, and also recovered enough strength to teleport them both to Sanctuary.

In Blood Omen 2, it was left unexplained how Janos had come to be imprisoned in the Device. Based on the events of Defiance, it is likely that the Hylden Lord (who later became the Sarafan Lord) took Janos there while he was still possessing Janos. It would have been a simple matter to have Janos walk into the cell area, so the Ward Gate barrier could be activated around him.