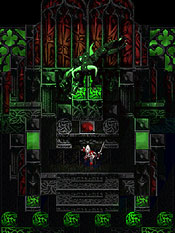 The altar of a Spirit Forge

Spirit Forges were large concealed chambers that Kain could discover as he travelled across Nosgoth in Blood Omen. By sacrificing some of his blood to them, he could purchase Battle Artefacts to help him on his quest. Each forge specialized in a particular type of artefact, so there were a total of eight to be found.[1]

Kain described the forges as being inhabited by "wraiths and shades". He said the Wraith Smiths created their artefacts with "forfeit souls". Kain's Wraith Armour was made by "the most impure of Spirit Forges, tempered from the seething agony of tortured souls." Despite these descriptions, the forges did not seem associated with the various types of wraiths and Shades that Kain and Raziel encountered elsewhere in Blood Omen, Soul Reaver, Soul Reaver 2 and Defiance.[1,2]

The forges were not concerned about the source of Kain's blood offering. Once he acquired the 'Control Mind' or 'Spirit Wrack' spells, he could send a human or creature into one on his behalf. Their lives would be sacrificed as chains seized their limbs and pulled them apart, but Kain would benefit greatly; the forge would reward him with ninety-nine of its prized artefacts.[3]

Most of the Spirit Forges had doors that only opened during a full moon. However, there were also secret 'back door' entrances to be found. Silicon Knights' Blood Omen FAQ included details about the Spirit Forges and their locations.[3,4,5]