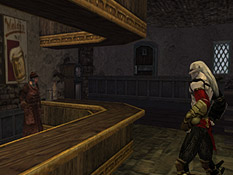 The Tapster was a minor character in Blood Omen 2. The word 'tapster' means someone whose business it is to tap or draw ale or other liquor; a bartender.[1]

In Blood Omen 2, Kain entered the Lower City region of Meridian, searching for the Cabal's headquarters: Sanctuary. Umah met him, but she had other orders and could not take him there herself. Instead she sent him to the Tapster of the Red Raven Pub.[2]

The Tapster was not an obvious Cabal sympathizer. She was a normal citizen of Meridian, and she had been half-scared into remembering a message for Kain. It had been dark when she'd been given the message, and she couldn't tell where the voice came from: "it was as if the night itself spoke" (to her). The Tapster told Kain to seek the vendor near the warehouse. That man was more closely allied with the Cabal and he had the detailed directions Kain needed. The tapster also gave Kain the means to get past the 'fool' Duncan, a local gatekeeper who was blocking his progress.[3]