Time Streaming Devices were devices that enabled individuals to travel through time, allowing them to visit periods of Nosgoth's history other than their own. They belonged to Moebius the Time Streamer.[1] 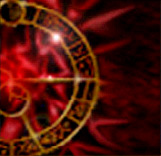 A Time Streaming Device in the Blood Omen inventory

In Blood Omen Kain found a Time Streaming Device as he left Avernus Cathedral. It was a portable metallic item, covered with runes. He carried it with caution.[3]

Kain returned to the Pillars and Ariel congratulated him for finding "Moebius' toy". Azimuth, she said, who was already summoning creatures from the the Demon Realm, had stolen the Time Streaming Device to to gather creatures from different times as well. Ariel told Kain to take care of the device, as it would "deliver [him] in time".[1]

Kain continued his journey and became involved in the Battle of the Last Stand. When the Legions of the Nemesis were victorious, Kain used the Time Streaming Device to escape the battle. It broke into pieces immediately afterwards.[2]

Kain killed a man, and read his mind as he lay dying. Kain realised the Time Streaming Device had sent him fifty years into Nosgoth's past. He took the chance to kill William the Just - the boy king who would have become the Nemesis - and opportunely found a second Time Streaming Device as he departed from William's castle. He noted the "convienient" coincidence, and ascribed it to fate. This one returned Kain to his native time, but something was wrong, and the Nosgoth he found himself in wasn't quite as he remembered.[4,5,6]

Kain witnessed Vorador's execution, and fought Moebius. Recognising Moebius as the Oracle of Nosgoth, Kain understood that he had been used by the Time Streamer, and it was no accident that the Time Streaming Devices had been placed in his path. They were part of Moebius' designs: his manipulation of Kain, part of which was to facilitate the extermination of Nosgoth's remaining vampires.[7,8]

In Soul Reaver Raziel fought Kain in the Chronoplast, and followed him through its portal into Nosgoth's past. 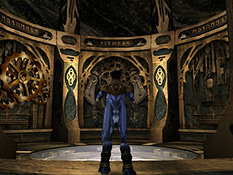 Inside a Time Streaming Chamber

In Soul Reaver 2 we saw three near-identical Time Streaming Devices, built into chambers. The first device was within a chamber in the Sarafan Stronghold, and Raziel arrived inside it at the start of the game. The second device was sealed by a crystal in a second chamber, directly opposite the first, and could only be opened by Raziel with the Light Reaver. The third device was deep in the Termogent Forest Swamp, accessible by Raziel only with the Air Reaver.[9,10,11,12]

The Time Streaming Chambers appeared to be constructed from brass, glass and dark green marble. They each had only one entrance: a single triangular opening with sliding doors. The doors were marked with the same symbol Moebius bore on his forehead: a vertically-oriented infinity symbol (or possibly a representation of the real-world mathmatical Möbius strip), and this symbol was repeated throughout the decoration of the chambers. It featured on the floor and on the walls, along with large metal components - including huge cogs - which presumably formed part of the functional mechanics of the Time Streaming Device. Each chamber had a domed ceiling, which gave the impression Raziel was looking through glass at a black night sky filled with densly-packed and constantly falling stars. This was reminiscent of the Chronoplast's starry ceiling. 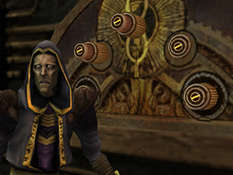 Moebius at the controls of the Time Streaming Device, opposite the entrance to the chamber

In Soul Reaver 2, after stepping through the Chronoplast's portal, Raziel ended up in a Time Streaming Device, thirty years before the events of Blood Omen. Moebius had "snatched [Raziel] out of the time-stream" so they could meet in a Time Streaming Chamber within the Sarafan Stronghold.[13,14]

Raziel explored Nosgoth for a while - and found a seemingly abandoned Time Streaming Chamber in the Termogent Forest Swamp - but he eventually returned to the Sarafan Stronghold. He opened the second Time Streaming Chamber there and coerced Moebius into operating the device inside. Raziel could activate the Time Streaming Device himself, but he had no knowledge of how to configure it to the time period he wanted (before the Sarafan crusade). Moebius sent Raziel to the future instead of the past.[11,15,16,17] 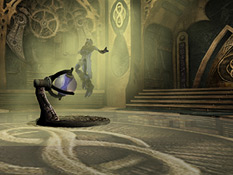 Raziel being carried through time having activated the device

Raziel found himself stranded, some one hundred years after Kain refused to sacrifice himself in Blood Omen. The Time Streaming Devices in the Sarafan Stronghold appeared largely undamaged despite the derelict state of the building, but they were not useable as neither contained an activation switch. The sliding doors of one were wedged permanently open. Raziel was forced to look for another way to get back to the era he sought.[17] 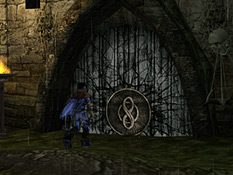 The sealed Time Streaming Device in the Termogent Forest Swamp

Raziel realised that the Time Streaming Device in the Termogent Forest Swamp was his only hope, but he couldn't break the seal on it immediately. He returned after gaining the Air Reaver, and used the Reaver to shatter the seal and get to the underground Time Streaming Chamber. Raziel activated the Time Streaming Device inside, aware that he was acting on "blind faith" that it was configured as he needed. Luckily, it appeared to deliver him to the time of the Sarafan crusade against the vampires. Raziel was suspicious of the coincidence, but he didn't fully consider the implications.[18,12,19]

As he had done for Kain in Blood Omen, Moebius had laid out a path through time for Raziel in Soul Reaver 2, and Raziel had obliged him by following it. Moebius' Time Streaming Devices were tools of manipulation: his detour to the future and the perfect configuration of the 'abandoned' Time Streaming Device gave Raziel a sense that he was acting independently, and blinded him to Moebius' larger scheme. He didn't anticipate that Moebius would use him to enable the murder of Janos, or that Moebius had set him up to be consumed by the Reaver. Both Raziel and Kain had fallen for the same trick, and as Moebius expressed to Raziel, they were fools for presuming they had a mastery of history and time greater than his: Moebius was the Time Streamer.[20]

It's unclear how Kain managed to follow Raziel through time in Soul Reaver 2, but we can presume he was using Time Streaming Devices too, perhaps the hand-held device he retained from Blood Omen (assuming that one remained intact after use). In Defiance Kain was transported through time by the Elder God (the Oracle of the Ancient Vampires), and we didn't see any Time Streaming Devices in that game.[21] 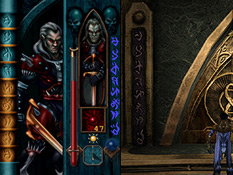 According to the Defiance team FAQ

at the Eidos Forums, it was Azimuth, using the hand-held Time Streaming Device she had stolen from Moebius, who brought Turel back in time from the Soul Reaver era to the Blood Omen era, enabling him to become the host for Hash'ak'gik.[22,1]

Inside Soul Reaver 2's Time Streaming Chambers there were symbols beside the entrance. These were the same as symbols used in Blood Omen, firstly to illustrate Kain's magic energy capacity and current level, and secondly to denote how many of the Pillars of Nosgoth had been restored. There is likely no significance to this reuse of symbols, but it's interesting to note.

The Time Streaming Chambers also contained some runes that looked like Nosgoth's Blood Script, but they couldn't be easily translated with the document Kain found in Blood Omen. The Futhark Runes page

at thelostworlds.net gives more details about this.[23]