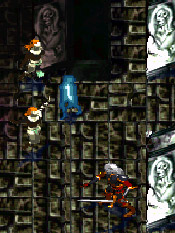 Kain encounters some of Vorador's brides

In Blood Omen Kain encountered female vampires in the Flame Sword keep, and also in Vorador's Mansion. These were Vorador's 'brides' (Malek later called them that). Much like Stoker's Dracula, Vorador appeared to keep a selection of women around him as lovers and companions. Kain acknowledged their beauty and diaphanous clothing, but he believed they were merely Vorador's pets, "nothing more than beasts" held in thrall by him.[1,2]

The brides had many skills between them. Some could achieve Mist Form and use the Blood Gout spell, others could teleport to strike Kain from behind. However, although they displayed these powerful gifts - some that Kain also possessed - Kain stated that they were dependant on their master. He said they were "slave to his will and the easy prey he provided"; they relied on Vorador's power to support them and bring them human victims.[1]

When Malek confronted Vorador at Dark Eden, the Paladin promised to hack Vorador "from crotch to gizzard" and feed what was left to his brides.[2]

It is unknown if Vorador was unique in having so many women around him. There is no indication that the vampires of Kain's empire built harems for themselves, but currently there is also no reason to rule it out. The brides have not appeared in any game since Blood Omen; they had all been killed prior to Raziel's visit to the mansion in Defiance.

There is evidence that the brides were originally intended to have a larger role in Blood Omen. There are several pieces of Unused Dialogue, still extractable from Blood Omen Playstation discs, that appear to belong to them. These snippets are transcribed below:

"Do I not please you, my lord? Come, taste of my flesh."
"I can sense your lust, warrior. Take of me what you will."
"Oh, such a beautiful body. Oh, the pleasures the undead can bring."
"You fool! Hell hath no fury..."
"Be quick, before Prince Vorador finds him. He is ours for the feasting!"
"Oh come, love - give us a little taste."
"The blood of our own... Oh, 'tis there anything sweeter?"

It seems that they would have started off trying to seduce Kain, but ultimately they only wanted his blood.

Also, 'Bride' featured as one of the lower rankings in Blood Omen's Prestige List. This may indicate their relative unimportance in Nosgoth's vampire hierarchy.