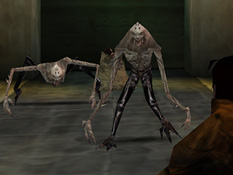 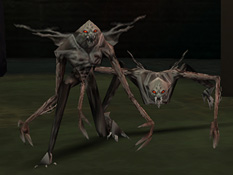 The Zephonim were one of the five vampire clans that appeared in Soul Reaver. They were the descendants of the lieutenant Zephon. Raziel encountered them in their stronghold: a derelict cathedral in eastern Nosgoth (the Silenced Cathedral).[1,2]

After his encounter with Kain in the Sanctuary of the Clans, the Elder God directed Raziel to the cathedral. The Elder told Raziel that Zephon and the Zephonim had "murdered its human guardians". Raziel knew that the cathedral has been conceived by its human architects as "a holy weapon against the vampire menace", with its pipes "once tuned to blast a deadly hymn". The Zephonim likely conquered the cathedral to prevent the humans using it against them.[2,3]

In the centuries since Raziel's execution, all of the clans had evolved and experienced dramatic physical changes. The Zephonim's evolution had made them spider-like. They were particularly agile, tall with thin, wiry bodies, and long arms and legs. They walked on all fours most of the time - and they could move faster that way - but they could walk upright if they wanted to. Their fangs were very prominent.[4] 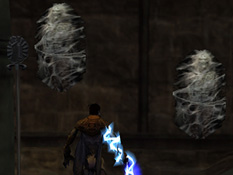 The arachnidan traits of the Zephonim did not stop at their appearance. They could scale most (if not all) vertical surfaces, clinging to them for long periods of time, or dropping down to ambush their prey from above. Curiously, they faced away from the wall while climbing. When they caught humans, they would bind them in thread, to feed from later. The Silenced Cathedral had a room where humans - writhing and wrapped up from head to toe - could be seen swinging from the ceiling and walls.

Adult Zephonim could be distinguished from their smaller fledgling counterparts by the large skin frills that decorated their backs. The clan pupated (evolved) inside grey/white cocoons attached to the cathedral's walls and pipes. Looking carefully, it was possible to see the shape of the enclosed Zephonim's face in the pulsing skin of a cocoon.[1]

Vampire Worshippers inhabited the Silenced Cathedral with the Zephonim. The Zephonim appeared to be the only clan making use of them, as they were not seen in any of the other clan territories Raziel visited.

As Zephon was the fifth-born of Kain's six lieutenants, it can be assumed that the Zephonim were stronger vampires than the Melchahim (the clan of the sixth lieutenant, Melchiah), but weaker than the others.[5,6]

Of all the clans, the Zephonim seemed the least inclined to leave their immediate territory. In Soul Reaver they could only be found in the Silenced Cathedral and the connected underground passages. By contrast, even the Melchahim had spread out as far as the remains of Nupraptor's Retreat and to the edges of Raziel's former territory.

The Zephonim practice of binding human prey in thread was not unique in the Legacy of Kain series. In Blood Omen 2, in the Canyons, the Lesser Demons bound humans in a similar fashion.