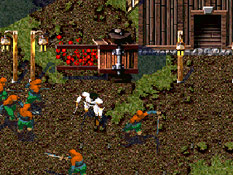 Ziegsturhl was a town that featured in Blood Omen. It was the smallest human settlement in that game, and it was located to the south of the Pillars.

Ziegsturhl was the place where Kain's destiny truly began to unfold. As a human nobleman, he stopped in the town's tavern one night, but was refused a drink by the landlord. Despite Kain's heritage, the landlord knew it was risky to keep his business open after dark. Nosgoth's night held many dangers, both human and inhuman.[1]

Forced outside, Kain was ambushed by a band of brigands, hired to murder him by the Death Guardian, Mortanius. The town's exits had been blocked by toppled fruit or vegetable carts, and there were so many assailants that Kain had no chance of escape. As he was beaten and knocked to the ground, an assassin drove a sword through his back. It impaled him, the tip emerging through his chest.[2]

Kain was resurrected by Mortanius, and awoke a few days later in his mausoleum. As a vampire, one of his first acts was to kill the brigands who had brought about his untimely demise.[2]

Ziegsturhl is alternatively spelt as 'Ziegsturchl' in Prima's Official Blood Omen Strategy Guide, and other variations appear in the Silicon Knights' Blood Omen FAQ. This website has opted to to remain consistent with the spelling on the in-game signposts.[3,4]

If Kain returned to Ziegsturhl after gaining the 'Control Mind' spell, he was able to take an appropriately unpleasant revenge on the landlord. The landlord could be controlled to trigger a switch behind the bar, opening a doorway and secret route to the Flay Spirit Forge [BO1]. He could be sacrificed - by dismemberment - on the Spirit Forge's altar.[5]

At some point during the development of Blood Omen, Kain's murder in Ziegsturhl was going to be shown as part of an FMV (Full Motion Video) sequence. A screenshot from the unused FMV appeared in the Defiance bonus material. In the released game, you control Kain during the ambush.[6]

It may be possible to fight off all the brigands (assuming there aren't an infinite number), but you would have to restart the game, as Kain has to be assassinated for the the plot to progress. There's no other way to get out of the town.