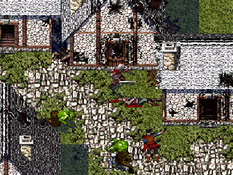 Avernus was in ruins in Blood Omen

Avernus was a large walled city located north of Willendorf. It was a "religious autocracy", and it had a huge cathedral at its centre. Avernus Cathedral was home to Azimuth the Planer - Guardian of the Pillar of Dimension - and as the single ruler of the autocracy, Azimuth would have had unlimited power to run Avernus as she wished. In the past, she had protected the city, and she held the title of 'the Matriarch of Avernus'.[1,2]

When Kain first saw Avernus in the distance in Blood Omen, it was burning. When he ventured into the city, he found that much of it was in ruins, and the blocked paths and roads turned it into a maze of buildings and underground passageways much like Coorhagen had been. Corrupted by Nupraptor's insanity, Azimuth had summoned demons and unleashed them on the city. They slaughtered the people. The closer Kain got to the cathedral, the more dangerous the demons were, although the cathedral itself was undamaged. As Kain said: "the demons knew better than to bite the hand that feeds them".[3,1,2] 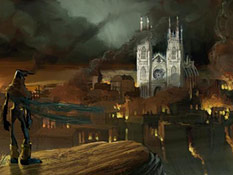 Concept art of Raziel approaching Avernus in Defiance. Avernus is burning, but the Cathedral is intact in the middle of it all

Avernus was mentioned again in Defiance, although it did not appear as a playable location. Vorador told Raziel that the Heart of Darkness had been taken to Avernus Cathedral as a trophy, following the murder of Janos Audron, five hundred years earlier. Vorador gave Raziel a key - a seal - that allowed Raziel to follow a direct route from the library of Vorador's Mansion to Avernus. Raziel saw Vorador in the library as he was about to depart; Vorador told him that Avernus was in flames, and that Raziel would therefore have to act quickly. We did not control Raziel again until he reached Avernus Cathedral.[4,5]

The Oracle of the Ancient Vampires showed Kain an image of Raziel approaching Avernus. Kain realized that as Avernus was shown burning, Raziel was five centuries ahead of Kain in time; Raziel was in the Blood Omen era. The Oracle provided Kain with a portal that would: "transport [Kain] in time to the very hour" that Raziel arrived in Avernus. When Kain emerged from the portal, he spotted Avernus burning from the outside terrace area of the Vampire Citadel. He used his Bat Form to fly there, bypassing the chaos of the city to rematerialize within Avernus Cathedral. He arrived just in time to meet Raziel exiting the Avernus Catacombs.[6]

Prima's Official Defiance Strategy Guide gives us a better idea of how the city was run when things were calmer in Nosgoth. The masked Cenobites - whom Kain and Raziel fought in the cathedral - supported Azimuth's rule by overseeing basic politics, health care and law enforcement within the city. When Azimuth turned her magic on Avernus, the Cenobites may have followed her lead in summoning demons, and directing these 'servants from the demon realm' to destroy it. We can also assume from Blood Omen and Defiance that the religion observed by the people of Avernus, and publicly practiced in the cathedral was quite separate from Azimuth and the Cenobites' secretive and bloody worship of Hash'ak'gik.[7]