Azimuth the Planer (The Matriarch of Avernus) 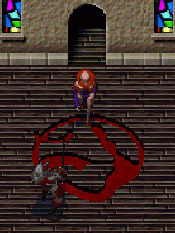 Azimuth the Planer appeared in Blood Omen. She was the Guardian of the Pillar of Dimension - one of the Circle of Nine - and as such, she could open portals to other dimensions, or realms.[1]

Azimuth was known as 'the Matriarch of Avernus', the city's protector and ruler of the religious autocracy. She resided within Avernus Cathedral, the huge cathedral in the city's centre. Azimuth was bald, like the Sarafan sorceresses of Soul Reaver 2.[2,3]

Approaching Avernus in Blood Omen, Kain saw it burning; consuming itself before his eyes. Azimuth had a sadistic nature even before she was afflicted with Nupraptor's insanity, and after his attack she was a 'raving lunatic'; She turned her magic upon Avernus, allowing demons to enter it through her portals: runes inscribed in human blood. They decimated the city, killing its people.[4,1,3]

When Kain entered Avernus, he found much of the city in ruins and demons confronted him regularly. He fought his way to the cathedral and entered, collecting the Wraith Armor and the Soul Reaver before meeting the Lady Azimuth - as he called her - in battle. She was unaware that the Wraith Armor and Soul Reaver were kept in Avernus Cathedral, or so she said.[2,5] 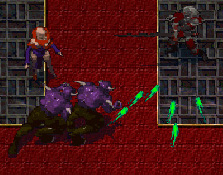 Azimuth and her demons attacking Kain

Azimuth summoned strong purple demons against him (Prima's Official Blood Omen Strategy Guide calls them 'Ogres'), and attacked him with homing green energy bolts; far longer-lived than the ones thrown by most creatures. She also teleported across the room if Kain got too close, making it difficult for him to strike her. However, when the opportunity arose, a single blow from the Soul Reaver was sufficient to kill her. Kain took Azimuth's third eye (her Pillar Token) to repair the Pillar of Dimension. He said the token had enabled her to look into other planes of existence.[6,7]

Azimuth was the only Blood Omen Pillar Guardian not to feature in an FMV (Full Motion Video) cut scene. As such, her physical appearance was a bit of a mystery. It was unclear, for example, if her third eye token was actually her eye, perhaps located in the middle of her forehead. Luckily, an FMV-style render of Azimuth does exist. Raz, a former member of the Nosgothic Realm Forums

found this interesting image of Azimuth in an old magazine he had. Mystery solved!

There was some indication in Blood Omen that Azimuth was a worshipper of Hash'ak'gik/the Dark Entity (in that first game, it was implied that they were one and the same). Firstly, she openly interacted with demons, and this was relevant because the Dark Entity took on a demonic appearance at the end of Blood Omen. Secondly, it seemed likely that she knew of, and used the concealed altar within the cathedral, upon which Kain found the book that mentioned Hash'ak'gik (Hash'ak'gik's Altar).

Azimuth didn't appear in Defiance; presumably she had already been killed by the fledgling vampire Kain before Raziel reached Avernus Cathedral. Despite this, her behind-the-scenes involvement was still tangible. Since Defiance was released, Azimuth's devotion to Hash'ak'gik - or rather the Hylden she knew as Hash'ak'gik - has been confirmed by Crystal Dynamics

in the first Defiance Q&A page

It has also been stated that Azimuth, using the stolen Time Streaming Device, obtained Turel from the Soul Reaver era. The implication is that the Hylden asked or commanded her to do it, and unlike the Avernus Cenobites, she was aware that he was just an impressive vessel for her god Hash'ak'gik, and not the god himself. It is unknown how much of a role she had in the Cenobites' ceremonies, but it would be odd if she wasn't an integral part of them. As the ruler of religious Avernus, she must have been a spiritual leader of some description.[10]

At some point during the development of Blood Omen, Azimuth was going to be named 'Hericus'.[11]