The Battle of the Last Stand 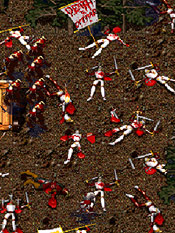 Part of the battlefield during the Battle of the Last Stand

The Battle of the Last Stand took place in Blood Omen.

In Blood Omen, while Kain was slaughtering the Circle of Nine, the land was facing another, more immediate threat. Generally, the deranged Guardians were causing localized damage, which had the potential to spread further. The Legions of the Nemesis, on the other hand, were systematically and inexorably destroying everything and everyone in their path. Assisted by his brutal legions, the vicious tyrant from the north - the Nemesis - would eventually conquer all of Nosgoth.[1]

Kain killed Azimuth in Avernus Cathedral, and returned to the Pillars. Ariel turned his attention to the threat posed by the Nemesis, with the "vague advice" that if Kain "was to defeat the next member of the Circle, [Kain] needed to understand his machinations". Moebius was this 'next member of the Circle', and it was his 'machinations' that had turned William the Just into the Nemesis in the first place.[1,2,3]

Ariel and the Oracle of Nosgoth had identified King Ottmar and the army of Willendorf as Nosgoth's last hope against the Nemesis. Kain roused Willendorf's forces - the Army of the Last Hope - by killing Elzevir the Dollmaker and returning the soul of King Ottmar's daughter. This army, under Ottmar's command, fought the Legions of the Nemesis.[1,4,5,6,7]

In this bloody 'Battle of the Last Stand' - the final, unsuccessful attempt to stop the Nemesis in his tracks - Ottmar's forces were defeated. After Ottmar died, Kain used a Time Streaming Device to escape from the battle.[8,9]

Following Kain's trip into the past and his murder of the boy king - William the Just - Nosgoth's history was changed. William never grew up to become the Nemesis, so the Legions of the Nemesis were never created, and there was no need for anyone to initiate the Battle of the Last Stand. On the altered timeline, this battle didn't happen.

It's a little unclear where the Battle of the Last Stand was fought; the in-game map did not record Kain's movements once he brought Elzevir's doll to Willendorf. However, it appeared to take place in the area south of Stahlberg, where - on the altered timeline - Kain would see Vorador executed, and confront Moebius.