The Cabal (The Vampire Resistance)

The Cabal (the Vampire Resistance) appeared in Blood Omen 2. They were an organization of vampires attempting to undermine the Sarafan's rule in Nosgoth. Their headquarters was Sanctuary; a secret location within the Lower City of Meridian, hidden under the Blue Lady Curios shop. Vorador - as the vampire patriarch - was the Cabal's leader.[1,2,3]

The Cabal (the Vampire Resistance) in Blood Omen 2 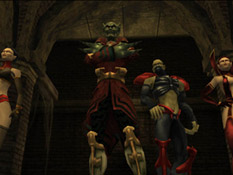 Vorador with members of the Cabal

In Blood Omen 2, Kain awoke in Meridian, two hundred years after his defeat by the Sarafan Lord. He had been comatose since that battle.[1]

He was greeted by the vampire Umah. She told Kain: "We did not expect you to awaken so soon", obviously referring to a group she belonged to. Umah said they had found Kain with "but the barest thread of life" left in him. They "nurtured it, fed it", and aided his recovery.[1]

Umah reminded Kain of his confrontation with the Sarafan Lord; how Kain - "a great general, commanding an army of vampires" - was defeated by the Sarafan, and most of the vampires were killed. She continued the story, bringing Kain up-to-date with current events. After the battle, the Sarafan "seized control of all of Nosgoth", "enslaved the humans under their iron rule, and hunted down and destroyed every vampire they could find". Umah and her associates wanted Kain's help to overthrow the Sarafan, and restore the balance of power in favour of the vampires.[1]

Kain asked who Umah represented. She explained they were the Cabal, the Vampire Resistance. They were working against the Sarafan as much as they could, but the Sarafan were successfully using Glyph Magic to find and kill them. Their faces were known. The Cabal thought Kain - who was supposed to be "ancient history, long since dead and buried" - would give them an advantage. They would support Kain's pursuit of revenge against the Sarafan Lord.[1]

Umah was reluctant to reveal the name of the Cabal's leader in public, and directed Kain to their headquarters - Sanctuary - where Kain could meet the leader in person. It was Vorador. Despite Vorador and Umah's attempts to make him sympathetic to their cause, Kain remained fairly noncommittal, but he loosely allied with them as a means to regaining control of the land. He accepted Vorador's directions as he travelled through Meridian. Human Cabal sympathizers - who wished to rebel against the harsh rule of the Sarafan - offered Kain help. Other humans also aided the Cabal, responding to different motivations: the Bishop of Meridian was tempted by the prospect of receiving the Dark Gift and the associated immortality as a reward. The Tapster was scared into passing on information.[4,3,1,5,6]

Umah's loyalty to the Cabal was the primary reason she stole the Nexus Stone from Kain at the Wharves. She believed his ambition to rule Nosgoth was so great that he would turn on the Cabal once the Sarafan Lord was dead; they would be the only ones left to stand in his way. It's unclear what Kain intended to do before the theft, but Umah's betrayal may well have helped turn her fear into a reality.[7]

Umah is described as a 'lieutenant' of the Cabal in the Blood Omen 2 Game Manual (UK and US versions).[8]

The vampires of the Cabal were either sired as a vampires by Vorador, or were otherwise descended from Vorador's bloodline. Vorador told Kain he had tried "many times" to persuade Marcus to join the Cabal.[9,10]

In Soul Reaver, there was no sign of any vampires other than Kain's descendants. It made sense when the game was released, as Blood Omen had ended with Kain as the last surviving vampire. However, the events of Soul Reaver took place on a different timeline from the events of Blood Omen 2, and may be subject to change if that period of history is revisited in a future game. On the new timeline, for Kain to be the ancestor of all vampires, he would have to deal with the Cabal. Once Kain learned how to create vampires himself - about a century after Blood Omen 2 - he had no real reason to tolerate Vorador and the Cabal, especially as their existence would cast doubt on his supposedly 'deified' status. It's likely they were killed or exiled during the establishment of his empire.[11,12,13]