Faustus appeared in Blood Omen 2. He was one of the traitor vampires working with the Sarafan, following the defeat of Kain's army. His outfit was red, black and gold, and he had long, black hair pulled into a high ponytail.[1] 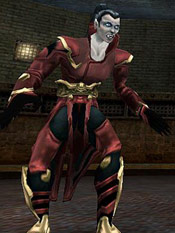 Faustus in the Smugglers' Den of Meridian

Faustus had once been one of Kain's legionnaires. After Kain's defeat at the hands of the Sarafan Lord, he had chosen to side with the victorious Sarafan instead of his vampire kin. This saved his life and gave him power, presumably over the humans of the Slums and Smugglers' Den in Meridian. He had no pity for the vampires he had since hunted and destroyed in the service of the Sarafan.[1,2]

Faustus followed Kain from the Slums, and killed the human contact who gave Kain directions to the Smugglers' Den. Kain later saw Faustus conversing with a Glyphwright, although he could not identify Faustus until they met shortly afterwards. As Kain entered a new room, he heard Faustus talking to him from the balcony above. As Faustus stepped into the light, Kain recognized him immediately.

Kain and Faustus fought. After a bit of hand-to-hand sparring, Faustus took their encounter into a second area. Faustus used his Dark Gift: 'Jump,' to remain out of Kain's reach for much of the battle, only attacking from a distance. Standing on top of one of four furnaces, above Kain, he threw firebombs (to clarify, these didn't appear to be the product of a Dark Gift, but rather artificially made) and jumped to a new furnace every time he saw Kain approaching his current one. In response, Kain used his Mist Dark Gift to hide himself, allowing him to pull levers that engulfed Faustus in flames. Disorientated and confused, Faustus was forced to leap from the furnaces to save himself. This happened several times before Faustus retreated to the roof, and opened it to clear all the mist from the room.

Faustus started an attack pattern of running along the roof girders for a while, before dropping to the ground again in preparation for a swift strike. He would land a safe distance away, then propel himself over many metres to hit Kain, trying to catch him by surprise. It was not a great strategy; as long as Kain kept moving, it was difficult for Faustus to judge his angle of attack, and instead of injuring Kain, Faustus often ended up missing him. After crashing unceremoniously into the floor, Faustus was temporarily too dazed to defend himself against Kain's claws.

Kain eventually managed to weaken Faustus so the vampire could no longer retreat to the roof girders. Faustus tried to jump up to them one final time, but he failed and fell to the ground. Kain then 'absorbed his veins', drawing the Dark Gift 'Jump' from Faustus' motionless body.[3]

Faustus was either sired as a vampire by Vorador, or was otherwise descended from Vorador's bloodline.[4]

Faustus' name was possibly inspired by Christopher Marlowe's famous protagonist: Doctor Faustus, who made a deal with Lucifer to trade his soul for personal gain. In the context of Blood Omen 2, the Sarafan Lord was Faustus' Lucifer.