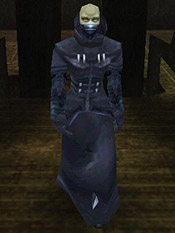 The Glyphwrights (or Glyph Wraiths as they are called in Prima's Official Blood Omen 2 Strategy Guide) appeared in Blood Omen 2. They looked like men wearing long, dark blue-grey coats. Their attire covered everything except their bald heads and yellow eyes. Kain first saw one while Umah was guiding him through the Slums of Meridian.[1]

According to her, the Glyphwrights were a secret society that maintained the Glyphs (and the linked Glyph Energy [BO2] pipes). They rarely interacted with anyone, and information about their origins was scarce. From overhearing a conversation in the Red Raven Pub, Kain could learn a little more: people knew to avoid them, and there was even a claim that they could walk through walls like ghosts.[2,3]

During his travels in Meridian, Kain ran into several Glyphwrights. He observed them vanishing into thin air, and notably, he saw one apparently speaking with Faustus. The Glyphwrights never challenged Kain when they noticed him, and they were always beyond his reach. He only discovered their true nature while he was inside the Device, trying to destroy it. Kain witnessed a Glyphwright revert to its true form: a Hylden. Their human form was merely a convenient disguise.

The Glyphwrights played a crucial role in the Sarafan Lord's plan for Nosgoth. They were the ones that ensured the Glyphs and the Glyph network functioned properly, ready for they day when the Device would be used. The network was intended to be a conduit for the lethal mental energy of the Mass. Their work would allow all living things - except for their race - to be destroyed.[4]