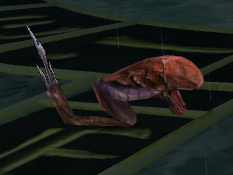 Groundlings - as they are called in Prima's Official Soul Reaver 2 Strategy Guide - appeared in Soul Reaver 2. The red Fire demons would sometimes spawn Groundlings to help them attack Raziel. They were Demon larvae and, like the Demons that birthed them, they could follow Raziel into the Spectral Realm.[1]

The Groundlings were small creatures which consisted only of a body and a tail. In fact, they looked very similar to a baby Alien (from the 1979 film Alien

). They could move swiftly along the ground, and when they got close enough, they would leap at Raziel, using their tails to spring themselves into the air. Luckily, one hit was sufficient to kill them, making their souls easy pickings.

Some people have had trouble finding Groundlings in Soul Reaver 2. This method works well, if you really want to see one:

In the second time period, visit Ariel at the Pillars, and trigger the 'Ariel's Lament' cut scene as usual. Raziel will be in the Spectral Realm when it finishes. Run up the staircase behind the Pillars, and avoid the Fire Demon that appears at the bottom. Do not kill it. Shift into the Material Realm at the nearest Planar Portal, and return to the Pillars' clearing, but do not enter it. Stand on the ledge above the clearing, and the Fire Demon will re-appear. Look down at it, and it will often produce a Groundling.