The Lake of Lost Souls and the Lake of Serenity featured in Blood Omen.

In Blood Omen, a lake surrounded the home of Elzevir the Dollmaker. This was the Lake of Lost Souls, aptly named considering the dollmaker's hobby. He stole souls and imprisoned them in his creations. If the the Princess of Willendorf was typical, his victims were left comatose, but alive. The lake likely got its name because of Elzevir's enchantments on people who visited the area.[1]

Kain visited the Lake of Lost Souls while trying to reclaim the Princess of Willendorf's soul from the strange little man. 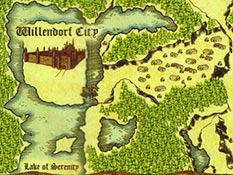 The Lake of Serenity surrounded Willendorf City, and the neighbouring Willendorf township could be reached by crossing a bridge on its east side. The in-game Map of Nosgoth shows that the lake extended a little further south than is illustrated to the right.

The lake's name was indicative of Willendorf's contentment. The city was wealthy, and the people adored their king. It was a serene kingdom, although it could not stay that way; the Nemesis' conquest of Nosgoth would lay waste to all before him, including Willendorf.[2,3]

Kain's trip into the past, and his murder of William the Just - who was destined to become the Nemesis - may have preserved Willendorf's serenity for a few more years, after the events of Blood Omen.