Moebius the Time Streamer (The Oracle of Nosgoth)

Moebius (The Oracle of Nosgoth) in Blood Omen

Moebius, the Guardian of the Pillar of Time, originally appeared in Blood Omen. His role as Time Guardian gave him control over time travel (he owned devices that made time travel possible) and this gave him the ability to forecast Nosgoth's history. The 'Character Biographies' page of the Silicon Knights Blood Omen FAQ described Moebius as: 'an intensely devious and conniving sorceror'. He was one of the longest-serving members of the Circle of Nine, but, because of his nature, not many of his fellow Guardians trusted him.[1] 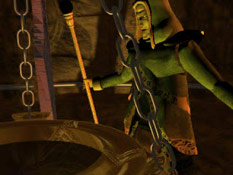 Moebius, the Oracle of Nosgoth

When Kain first met him, the Time Streamer was in the guise of the Oracle of Nosgoth. As the Oracle, Moebius offered valuable information about the future to his visitors - those pilgrims fortunate enough to survive the journey through the labyrinthine Oracle's Cave, and pick a time when he would actually be there. He was thought to be 'a wise and benevolent man, proficient in the arts of divination and prophecy'. Presumably - to gain that pleasant reputation - some things he said in the past must have had a positive outcome for the inquirer.[1]

Following Nupraptor's mental attack on the Circle, the Oracle was apparently less helpful. He caused 'trouble and torment by predicting omens and horrific events, exploiting them to his own ends'. Based on the later games in the Legacy of Kain series, we know that Moebius did not require insanity to become a manipulative troublemaker: he had been that way for centuries. Perhaps Nupraptor's assault had simply caused Moebius to be less discriminating; he started to exploit everyone, whether they were important to Nosgoth's fate or not.[1]

At Ariel's suggestion, Kain sought the Oracle for advice on how to defeat Malek. Kain found the old man standing beside a large cauldron, and the Oracle conjured up visions from it to answer Kain's questions. Moebius/The Oracle told Kain about the plight of King Ottmar of Willendorf. When Kain pressed him about the Paladin, he also spoke of Malek's failure to protect the Circle from Vorador, five centuries earlier. He gave Kain directions to the vampire's mansion. Kain accepted Moebius' guidance, never suspecting his true identity or intentions. 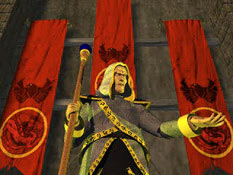 Moebius incites the humans of Nosgoth against the vampires

Kain fell into Moebius' carefully-constructed trap. As Moebius intended, Kain found a Time Streaming Device in Avernus Cathedral, and traveled back in time to escape the Battle of the Last Stand. Kain was transported fifty years into Nosgoth's past. There, he foolishly took it upon himself to murder William the Just - the boy king who would become the Nemesis - not appreciating the full consequences of his actions.

Moebius had been giving grand public speeches, inciting William's subjects against Nosgoth's vampires. He had also been acting as an advisor to the boy king. He warned William of Kain's impending arrival, and provided him with weapons - one of which was likely the Soul Reaver. Regardless of how he got it, when Kain fought the king, both of them were armed with the legendary blade. A paradox was caused during the battle, and the path of history shifted to allow William to die before his destined time. 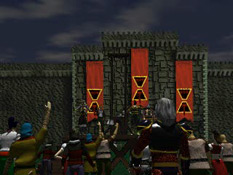 Kain watches Moebius on the scaffold after the execution of Vorador

This was the outcome Moebius had planned for. William had been killed by a vampire, so he was able to mobilize William's grief-stricken and vengeful subjects against the 'unholy scourge'. When Kain returned to the time period of Nosgoth he was familiar with, he found that Moebius' citizen army had hunted the vampires to near-extinction. He witnessed the execution of Vorador, then Moebius set the spectators on Kain, the last survivor of the vampire race. 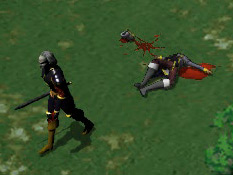 Kain finally recognized who Moebius was, and how the Guardian had used him. Kain fought off the humans, and then confronted the Time Streamer. Moebius summoned up apparitions from the past, present and future to fight Kain, including a future version of Kain. The latter was clearly an illusion, as Kain would not fight himself. Soul Reaver 2 showed us another occasion when Moebius used an illusion, attempting to turn a situation to his advantage. Moebius' minions were eventually exhausted, and Kain beheaded him, claiming his hourglass token to repair the Pillar of Time.[2]

A short while later, when Kain realized that he was the Balance Guardian, he understood how clever Moebius had been. Killing himself would eliminate the vampire race, but living on would damn the Pillars to eternal decay. Kain probably made his decision to survive though blind stubbornness, but, as he later claimed, it was actually the better course of action out of the two choices. It left him the possibility of finding a third option - a better way out of the Time Streamer's rigged game.

Moebius' story did not end with his death in Blood Omen. As Raziel explored the cauldron room of the Oracle's Cave, he reflected on what he knew about the Time Streamer from Kain's "boasted exploits": Moebius was "a ruthless manipulator with the power to bend time". Raziel found a life-sized statue of Moebius, but "he seemed not at all the impressive figure [Raziel] had imagined".

When Raziel pursued Kain through the Chronoplast's portal at the end of Soul Reaver, he met the Time Streamer on the other side. 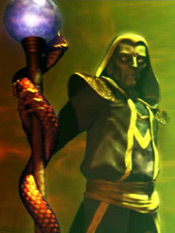 Moebius greets Raziel on the other side of the Chronoplast portal

In Soul Reaver 2, Raziel learned he had emerged into a time where Moebius still lived, thirty years before Kain would decapitate him. They were in the Sarafan Stronghold, although in this era - twenty years after the murder of King William - it was inhabited by Moebius' army of vampire-hunters.

Moebius was quick to send Raziel after Kain, manipulating him as easily as he had manipulated Kain in Blood Omen. He witnessed Raziel repair the broken Soul Reaver on William's sarcophagus, taking a calculated, but very real risk by being there. Moebius was a worshipper of the Elder God, and although Raziel was on the verge of rejecting his ancient benefactor, Moebius used that link to save his life when Raziel threatened him. Moebius knew Raziel could have chosen to kill him there - understanding Raziel's free will - but said it would be Raziel's "only chance" to do so.

Raziel met Kain at the Pillars, and visited the Dark and Light forges before returning to the Sarafan Stronghold. He encountered Kain again in the stronghold's main hall, and spared Kain's life, despite the pull of history. This caused history to reshuffle around the changed event.

Raziel intended to use the stronghold's second Time Streaming Device to go back to the an era before the Sarafan's Vampire Purge. Moebius appeared as Raziel opened it. This appeared to be the one occasion in Soul Reaver 2 when Moebius was truly caught off guard. Presumably, when history was changed by Raziel refusing to kill Kain, it altered what Moebius knew, and undermined his foresight. Moebius was 'genuinely shocked and distressed', and trying 'to regain control of the situation'.[3]

Moebius tried to reason with Raziel regarding Kain, but Raziel was uncooperative. Moebius operated the Time Streaming Device as he was told, but he stranded Raziel in the future, some one hundred years after Kain refused to sacrifice himself for Nosgoth. There, Raziel encountered and dismissed Moebius' martyred spirit (Crystal Dynamics

have since confirmed the 'ghost' was an illusion constructed to influence Raziel).[2]

Raziel had to find another way back into Nosgoth's early history. He used a third Time Streaming Device in the Termogent swamp, but although it was suspiciously set, Raziel had started to underestimate Moebius. That was a huge mistake. Five hundred years before the events of Blood Omen, Moebius of that era used Raziel to lead the Sarafan elite to Janos Audron. He also detained Malek to trap Raziel, so the Paladin could not protect the Circle from Vorador's attack. He arranged the ambush to get Raziel to take up the stolen Reaver, knowing what it would eventually do to him.

Moebius did not feature in Blood Omen 2, but there was a large statue of him within the Eternal Prison: a place where time was frozen. This suggests that he had a hand in making the place, or more likely - as it held a Hylden prisoner, and the Hylden were banished from Nosgoth before Moebius' birth - he claimed it as his own after finding it.