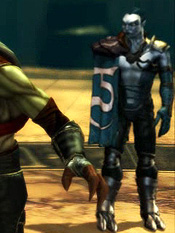 Rahab first appeared in Soul Reaver. He was one of Kain's six vampire lieutenants, and therefore a member of the Council. He was the patriarch of the Rahabim clan.[1,2]

Rahab was seen standing in the Sanctuary of the Clans at the start of Soul Reaver's opening FMV (Full Motion Video). His hair was slicked back. His shoulder cape was blue, and he stood to the right of Kain's throne, with Melchiah to his left, and Dumah to his right.

Raziel arrived at the the Sanctuary of the Clans, and presented his newly-grown wings to Kain and his fellow lieutenants. Rahab did nothing to intervene when Kain ripped the bones from Raziel's wings, and ordered Raziel's execution. Rahab travelled to the Abyss with Kain and his brethren, and witnessed Raziel being thrown in.

Raziel returned from the Abyss, seeking revenge on Kain and his lieutenant 'brothers' who had supported Kain's treatment of Raziel through their actions or inaction. He found that "centuries had apparently passed".[3,4]

After killing Melchiah and Zephon, Raziel made his way through the Tomb of the Sarafan. There he learned a shocking secret: Rahab and all of Kain's lieutenants - including Raziel - had once been Sarafan warrior-priests. A series of rooms indirectly connected the Tomb of the Sarafan to Rahab's territory: the Drowned Abbey.[5]

As the name implied, the abbey was half submerged in water. It would have been unthinkable for any other clan to choose it as a home. Water was deadly to vampires in Soul Reaver, young and old. However, through their evolution, Rahab and his progeny had somehow become amphibious.[6] 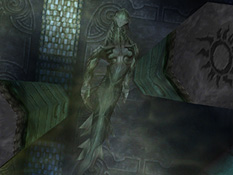 Raziel worked his way through the abbey and finally confronted Rahab. Since Raziel's execution, Rahab had turned into a large shark-like creature. He had less freedom of movement than his offspring, as he no longer had legs; just a powerful tail. This meant he was largely confined to the water, but in it he had no equal. Rahab was the 'undisputed King of the Sea'. He also had the ability to shoot blue (water?) projectiles at his prey. His clan symbol was marked - probably tattooed - on his back, upon his shoulder blades.[7] 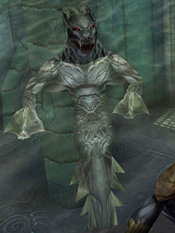 Raziel commented that Rahab had "adapted well" to his environment, "for one so maladjusted". He found his sibling rather resigned to destruction: Rahab claimed to have spoken with Kain, who had forewarned him of Raziel's arrival. It was unclear when the conversation had taken place, but it sounded recent, possibly making Rahab the only lieutenant whom Kain maintained contact with.[6]

Raziel queried whether Rahab knew of their shared Sarafan heritage, but Rahab dismissed it as unimportant. He was still loyal to Kain, regardless. He cautioned Raziel to "mind [his] blasphemous tongue" when speaking about Kain, and said that Kain had saved them when they were lost; he had saved them from themselves.[6]

Rahab was invulnerable to water, but his beneficial evolution had a price: he could no longer tolerate sunlight. His resistance to it had declined since the time of Raziel's execution. Most adult vampires could cope with Nosgoth's weak daylight. It was muted by the smoke belched into the sky from the vampires' furnaces, but Rahab couldn't even withstand that any more. Raziel exploited this deficiency to kill him. He destroyed the small stained glass windows that decorated Rahab's chamber, and let the sunlight pour in.[6,1]

When Raziel devoured Rahab's soul, he inherited Rahab's resistance to water. From then on, his physical body would no longer dissolve on contact with water, and he could swim to new areas of Nosgoth.[6] 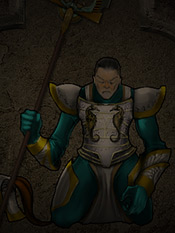 The mural of Sarafan Rahab 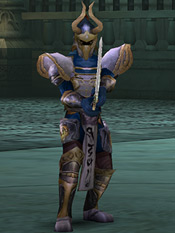 In Soul Reaver 2, Raziel saw the human Rahab's portrait in the Sarafan Stronghold. Each man honoured in the chapter house's murals had unique armour, but Rahab's stood out. His breastplate was decorated with seahorses. It was a curious coincidence, considering the creature he would one day become.[8]

Raziel travelled further back into Nosgoth's history to find Janos Audron. Five hundred years before the events of Blood Omen, Raziel met Janos and witnessed his assassination by a party of Sarafan: those who would become Kain's vampire lieutenants, including himself. Strangely, Rahab was not among them. There is little doubt that he was part of their elite group, but it is impossible to know where he was during the murder. Presumably he had other orders.[9]

Raziel chased the men back to the Sarafan Stronghold, to avenge Janos' death and to take back the Reaver and the Heart of Darkness. By the time Raziel got there, Rahab had rejoined his comrades and, armed with a sword, he fought alongside Dumah in the main hall. Raziel killed them both using the Reaver (which he had found in the stronghold). Rahab's corpse was interred in the Tomb of the Sarafan, and around a thousand years later Kain resurrected him as a vampire.[10,11]

Rahab's comment - that Kain had saved his Sarafan lieutenants from themselves - had shades of Janos' statement in Soul Reaver 2; that with every vampire they killed, the humans were "slitting their own throats". Maybe Rahab's talks with Kain had strayed into discussions about vampire history and their connection to the Pillars of Nosgoth?[6,12]

Rahab is believed to be the fourth vampire lieutenant raised by Kain. Based on Raziel's comments in Soul Reaver 2, we know that Rahab and Dumah were placed third and fourth. Melchiah and Zephon were "the weakest of Kain's brood", and Turel was identified as the second lieutenant - Raziel's second-in-command - in the Soul Reaver 2 Dark Chronicle. Although there is no conclusive evidence, Dumah seems a more convincing candidate than Rahab for the third lieutenant (Dumah helped Turel carry Raziel to the Abyss).[13]

Rahab had shown early signs of his adaptation to water in the Soul Reaver opening video. It was almost impossible to see, but he had the beginnings of gill-like flaps of skin on his neck. A highly-detailed image of Rahab, available on Boyd Lake's website

shows him with even more curious traits. His skin is unusually textured and appears to have a blue tinge to it, even beyond the image's colourization. Strangely for a Nosgothic vampire, Rahab's eyes in this concept are a striking cyan colour; yellow/amber is the normal colour.[14]