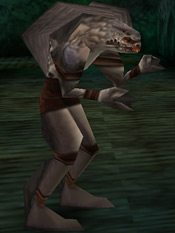 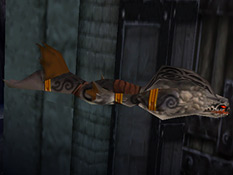 The Rahabim were one of the five vampire clans that appeared in Soul Reaver. They were the descendants of the lieutenant Rahab.[1]

In the centuries since Raziel's execution, the Rahabim had experienced a remarkable and beneficial evolution. They became amphibious. The vampires in Soul Reaver, young and old, were characteristically vulnerable to water. It burned their flesh like acid. The Rahabim appear to have been unique in overcoming this weakness. Not only could they withstand contact with the water; they thrived in it. Their bodies had become streamlined (with an unusual cobra-like hood), and they were proficient swimmers. While swimming, they displayed fins on their lower legs, presumably for stabilization, and they circled and attacked their prey like sharks.[2,3,4]

Raziel encountered the Rahabim when he visited their territory: the Drowned Abbey. Some of them had strayed from their domain, so Raziel could also meet them around the Water Glyph Altar - inside the Human Citadel - and it was possible to lure them back into Raziel's former territory. Exploiting Nosgoth's waterways, the Rahabim had the potential to be the most widespread of the clans, but a drawback of their evolution prevented it: the clan could not tolerate sunlight. They could only survive Nosgoth's weak daylight if they were sheltered by a roof or submerged underwater. Even the adults would burst into flames if exposed to it.[4] 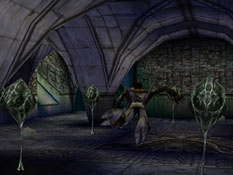 It was possible to distinguish the adult Rahabim from the fledglings by looking at their markings. The fledglings were plain, but the adults had decorative designs all over their body and hood. They appeared to wear jewellery too; they had gold bands around their wrists, ankles and upper arms. The Rahabim evolved in underwater cocoons, anchored to the floor or river bed.

Raziel used sunlight to kill Rahab. Devouring Rahab's soul enabled Raziel to swim, and therefore face the Rahabim on a more equal footing. Even so, they still had a great advantage over him in the water. On land, they were easier to overcome, but they often struck their enemies from a distance using projectiles. At first glance, one might assume these were identical to the Turelim clan's Telekinetic Force Projectiles, but this is not the case; they look completely different. The Rahabim projectiles were blue rather than being colourless compressed space, and they did not have the light-bending effect of the Turelim projectiles.

Whatever, it seems clear that the Rahabim and Turelim projectiles were different; the Rahabim attack was likely not telekinetic at all, and therefore (amongst Kain's descendants) telekinesis was an evolutionary trait likely unique to the Turelim.

Prima's Official Soul Reaver Strategy Guide calls the Rahabim Raziel's 'deadliest Material enemies'. Despite being the clan of Kain's third or fourth lieutenant (Rahab was most likely fourth, after Dumah) they were especially dangerous as, in the water, Raziel had no way to deliver a fatal attack to them. Striking them with projectiles or throwing spears at them while underwater only stunned them temporarily.[5]