The Ruined City of the Dumahim (Ash Village) 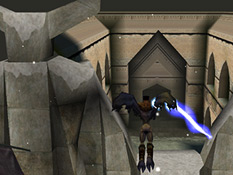 Entering the Ruined City of the Dumahim

The Ruined City of the Dumahim or Ash Village (it's called both in Prima's Official Soul Reaver Strategy Guide) was a location in Soul Reaver. It was the territory of the lieutenant Dumah, and his clan, the Dumahim. It was to the north of the Abyss.[1] 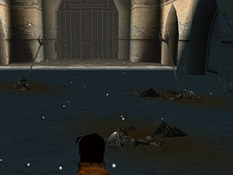 Dumahim corpses in the ruined city

Raziel visited the city after killing Rahab. He saw that a massacre had taken place there, long ago. Dumahim corpses were in the courtyard and scattered throughout the city building, slowly decomposing to skeletal remains. Raziel suspected that Kain might have been responsible, but he was corrected by the Elder God. The devastation in the ruined city was Dumah's fault.[2,3]

Dumah and his clan had been too arrogant, failing to acknowledge the small threat posed to them by Nosgoth's humans. They paid a high price for their complacency: their territory had been attacked by human Vampire Hunters. The surprise attack had caused heavy losses to their number, and permanently incapacitated Dumah. Deprived of his leadership, those Dumahim who survived had been "reduced to scavengers". A few living Dumahim still inhabited their city, however, there were not many.[3] 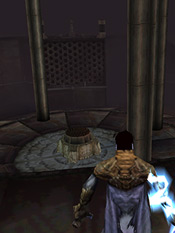 Central to the city was a huge furnace. Presumably it was required to heat the city, as it was cold in northern Nosgoth, with falling and settled snow. 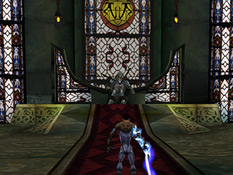 Deep inside the ruined city, Raziel had to topple a large obelisk to break down the door to Dumah's throne room. The throne room contained two massive statues of Dumah, and Dumah himself was seated on his throne, in front of an impressive, decorative stained-glass window. He was bound to the throne and impaled with three large stakes.

Raziel reanimated Dumah be removing the stakes, and led Dumah into the ruined city's furnace. Raziel incinerated Dumah there, gaining the Constrict ability from Dumah's soul.[3]

The alternative name of Dumah's territory - Ash Village - may suggest that it was covered with falling ash as well as, or instead of, snow. There is evidence that Turel's territory - which didn't appear in the released version of Soul Reaver - may have been located near Dumah's, and it would have included the smokestack seen in Soul Reaver's opening FMV (Full Motion Video).[4]

We know from Soul Reaver's Background Story that 'huge furnaces were built to belch smoke into the sky, shielding the land from the poisonous effects of the sun'. The furnace in Dumah's city may have been part of that technology, and perhaps Dumah's territory got its name from the ash that rained down from the smokestack in Turel's.[5]