The Sanctuary of the Clans

The Sanctuary of the Clans featured in Soul Reaver. It was the building constructed around the remains of the Pillars of Nosgoth, the seat of Kain's vampire empire.[1]

In the Background Story, as given in the Soul Reaver Game Manual (UK and US versions), Raziel described how Kain 'set his capital in the ruins of the Pillars of Nosgoth and began his conquest of the world', siring his lieutenants - including Raziel - to assist him in that task. Humanity was 'domesticated' by Kain's vampire legions within a century, and the Sanctuary of the Clans was subsequently built around the Pillars by slaves. In Raziel's words, it was 'a shrine worthy of our new age, worthy of our new renaissance'.[2] 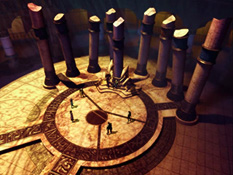 The Pillars inside the Sanctuary of the Clans, as seen in Soul Reaver's opening FMV

The interior of the Sanctuary of the Clans featured in Soul Reaver's opening FMV (Full Motion Video). We saw the Council of Nosgoth assembled, awaiting Raziel's arrival at the Sanctuary of the Clans. Kain was seated on his throne at the base of the Pillar of Balance. His lieutenants were standing in a circle upon the Pillars' platform; Melchiah, Rahab and Dumah were to Kain's right, and Zephon and Turel stood to his left, with a clear space for the first-born, Raziel. When Raziel approached and presented his newly-grown wings to Kain, Kain rose, tore the wings from Raziel, and ordered his execution. Raziel was carried from the Sanctuary of the Clans to the Abyss, and thrown in. 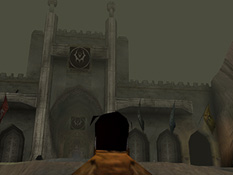 The exterior of the Sanctuary of the Clans

When Raziel returned from the Abyss as a wraith, he soon found his way back to the Sanctuary of the Clans. He was shocked to see "how humble it now appeared, collapsing into the dust of its former magnificence." The state of the building informed Raziel how much time had passed in the Material Realm since his execution: it was apparently centuries. Adults of the Dumahim clan lingered outside.[3,1]

The exterior façade of the Sanctuary had central tower and battlements that made it look vaguely castle-like. The flags of all six clans were hung above alcoves in the wall (the Razielim flag still remained there despite Raziel's fall from grace). From left to right the flags belonged to the clans of Zephon, Dumah, Raziel, Turel, Rahab and Melchiah. The building was symmetrical in its design: the tower and the main entrance doorway to the Sanctuary were between the Turelim and Razielim flags, and both were marked with Kain's symbol, built into the wall.

Raziel tried to enter the Sanctuary, but he couldn't open the main entrance. He guessed the doors were "either barred from the inside or rusted shut". He was only able to get inside when he returned later, having killed Melchiah. The alcove beneath Melchiah's clan flag was actually a gateway with Raziel could phase through after devouring his soul. The Elder God had directed Raziel back there with a warning that the building was "abandoned, but not uninhabited".[4,5] 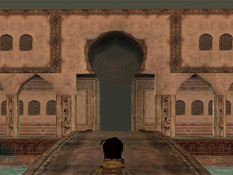 Raziel encountered several more Dumahim inside the Sanctuary of the Clans. Beyond the main entrance, there was an open-air courtyard. The clan symbols of Turel, Raziel, Dumah and Zephon were used decoratively on stone columns supporting archways, and there was a walkway down the centre, with shallow pools of water on either side. The water - less than waist deep on Raziel - damaged his physical form, but it was not enough to immediately force him back into the Spectral Realm. It was, however, sufficient to kill the pair of vampires who confronted him there. 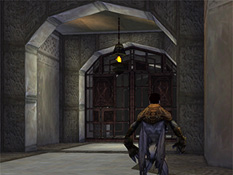 In the octagonal corridor around the Sanctuary's central throne room

Beyond the courtyard, an octagonal corridor surrounded the central throne room of the Sanctuary. The doorway to the throne room was located on the opposite side of the octagon from the courtyard, presumably to ensure that room's security. The corridor was guarded by Dumahim and blocked with four floor-to-ceiling gates: two barring each route around it (left or right). The gates bore Kain's insignia. 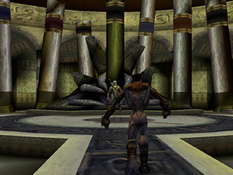 Raziel phased through the gates and opened the doors to the throne room. They slammed shut behind him. Kain was waiting for Raziel, and they exchanged words. Now the clans were "scattered to the corners of Nosgoth", Kain stated that the Sanctuary of the Clans had "outlasted its usefulness". He and Raziel fought, and the battle came to a close when Kain shattered the Soul Reaver by striking Raziel with it. Kain teleported away, leaving Raziel to claim the wraith-blade and meet Ariel. She was still bound to the Pillars of Nosgoth, regardless of the amount of time that had passed, or the building that had been constructed around them.[6] 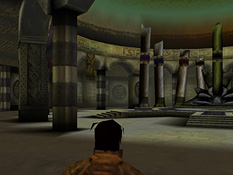 The left side of the throne room's interior

The throne room had a domed ceiling. Its interior featured the six clan symbols in relief on the walls, and their flags hung below a narrow upper tier. Striped pillars supported the upper tier which circled the throne room and had an exit opposite Kain's throne. Raziel had to return to the Sanctuary after killing Zephon, as he needed to scale a damaged section of wall - formerly one of Dumah's clan symbols - to reach the upper tier. The upper level of the Sanctuary didn't contain anything of note, but passing through it allowed Raziel to find the route to the Tomb of the Sarafan.

Additionally, Raziel could return to the Sanctuary of the Clans at any point in his travels if he wanted (fairly cryptic) guidance from Ariel, or to use the Health or Eldritch Energy Recharge locations there.[6,7]

The throne room of the Sanctuary in Soul Reaver's opening FMV looks like it may be lit with sunlight. Perhaps the domed ceiling was not added until after Raziel's execution? Also, the in-game room seems a bit smaller in scale.

The Sanctuary of the Clans was built approximately six hundred years after the events of Blood Omen. It's calculated as a century after Kain resurrected the Sarafan martyrs as his lieutenants. We know that he raised them 500 years after Blood Omen from dialogue in Soul Reaver 2.[2,8,9]

Raziel could only estimate that "centuries had apparently passed" since his execution from the dilapidated appearance of the Sanctuary of the Clans. The Blood Omen 2 Q&A

Ariel was inside the Sanctuary of the Clans throughout Kain's reign. It's unclear if anyone besides Kain was aware of her existence. Although she claimed to have been taunted by "Kain's creatures", some fans think that's a reference to her unpleasant encounter with Raziel in Soul Reaver 2.[6,11]

We know from Soul Reaver 2 that there was an ancient chamber and a network of underground caverns beneath the Pillars. Most likely the Subterranean Pillars Chamber was left undiscovered during the construction of the Sanctuary of the Clans (i.e. the slaves didn't dig too deeply around the Pillars to lay its foundations) or Raziel was somehow unaware of the find.

Assuming fan wisdom about the order in which Kain raised his lieutenants is correct, the flags hanging outside the Sanctuary reflect this. Alternating from left to right, moving outwards from the centre we have the clan flags of Raziel (rightmost left), Turel (leftmost right), Dumah (centre left), Rahab (centre right), Zephon (leftmost left) and Melchiah (rightmost right). It is notable that the clan flags of Raziel and Turel are the closest to Kain's insignia in the middle.

One of Soul Reaver's Health Power-Ups was located in plain view, just inside the Sanctuary of the Clans.