The Scion of Balance

The Scion of Balance in Defiance

The Scion of Balance was first mentioned in Defiance. Kain visited the Sarafan Stronghold to learn the wherabouts of Raziel from Moebius. Moebius' Staff incapacitated Kain and the Time Streamer accused him of arrogance. Moebius claimed Kain's "messianic delusions"; his belief that he was "that myth of Vampire prophecy" - the 'Scion of Balance' - and his belief that Raziel held the key to fulfilling his destiny had blinded Kain to Raziel's "true nature".[1]

Later, Kain found Moebius in another part of the Sarafan Stronghold. This conversation was more on Kain's terms, as he prevented Moebius from using his staff at the outset. Moebius was insistent that Raziel was not what Kain thought, and was, in fact, far more dangerous than Kain could understand. Kain demanded proof, and Moebius directed him to "a testament written in stone": the Vampire Citadel, to the west of the Pillars. When Kain reached the citadel, he commented that Moebius had done him a service in sending him there. Kain himself didn't fully understand the details of the Scion of Balance's role, and he hoped to discover the secrets of his destiny.[2,3]

In Blood Omen, Kain was established to be one of the Circle of Nine, a Guardian of one of the Pillars of Nosgoth. He was the Guardian of the Pillar of Balance. There had been at least three Balance Guardians before Kain (including Ariel), but none of those had been referred to as the 'Scion of Balance'. The title was therefore not synonymous with the Balance Guardianship, and implied a role with duties and a destiny beyond that of a Balance Guardian. In Soul Reaver 2, Kain said he wished to "return the Pillars to their rightful inheritors": the vampires. It appears this is what the Ancient Vampires expected of him when they foretold his coming.[4,5]

When Raziel entered the Spirit Forge - after apparently killing Kain in Avernus Cathedral - he saw a mural of the Scion of Balance. The Scion had the blue skin and black wings of the Ancient Vampires, but overall the resemblance to Kain was unmistakable. He was depicted with long, white hair and holding the Soul Reaver. The sword was neither the blood-drinking Reaver wielded by the Vampire hero, or the 'flaming sword' wielded by the Adversary (Hylden) Hero in their murals. It was a combination of both. The Elder God drew Raziel's attention to the Scion mural, telling him that his fate was trivial: as the Scion of Balance, it was "Kain's destiny that mattered all along".[9,10]

Raziel left the Spirit Forge, and witnessed the fall of the Pillars from the Vampire Citadel. Just before the Pillars were toppled by the fledgling Kain's refusal to sacrifice himself, Janos thought that - despite the Binding failing - there was still hope, if Raziel could find the "One who will be called": the Scion of Balance. Janos thought Raziel was a saviour of the Vampires, so he apparently knew the Scion was different from the Vampire hero. It's likely he had seen the mural of the Scion (and the heroes) in the Spirit Forge, and so had not merged them into one individual. When the Hylden Lord possessed Janos, he mocked Raziel for delivering Janos to them, with the added bonus that Raziel had "murdered the Scion of Balance" to get the Heart of Darkness.[11,12,13]

Actually, Kain's nature as the Scion of Balance allowed him to survive the removal of the Heart of Darkness. Also, Raziel's actions, fulfilling the role of the Vampire hero, purified Kain of Nupraptor's madness. At the end of Defiance, we can assume this enabled Kain to properly take possession of the Pillars - as the uncorrupted Guardian of Balance - facilitating the Pillars' eventual return to Vampire Guardianship. It is unclear what destiny, if any, had been prophesied for the Scion of Balance beyond this.[5,14,15] 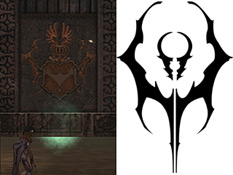 The shape of Kain's clan symbol - first seen in Soul Reaver, and appearing in subsequent games - bears an uncanny resemblance to the pose of the Scion of Balance in the Spirit Forge mural. Kain adopted that symbol before he fought the Sarafan Lord outside of Meridian in Blood Omen 2. It could be spotted in the dream-sequence opening FMV (Full Motion Video). He probably knew nothing about the Scion prophecy then, making it an odd coincidence. There is also some resemblance to his human family crest (as seen in Defiance).

The word 'scion' is a botanical term meaning a cutting taken from a plant for the purpose of planting or grafting it to another. More commonly, it means child, descendant or heir (derived from the botanical definition by way of the 'family tree' analogy).[16]