The courtyard full of Sebastian's victims

Sebastian appeared in Blood Omen 2. He was one of the vampires in the employment of the Sarafan Lord. He wore blue and silver-coloured armour with a blue cloak. He also wore a silver-coloured skullcap, which hid any hair he might have had.

While Kain was searching for Sanctuary in the Lower City of Meridian, he found a small courtyard. Human bodies littered the ground; some torn to pieces. The vampire responsible for the massacre killed another man, then he acknowledged Kain. He knew Kain, although Kain (with his fragmented memory) could not recall ever meeting him.[1]

The vampire made it clear that he did not like Kain, but claimed he was too busy to deal with him. Kain gave chase, and eventually the vampire stopped to continue their conversation. Kain accused him of being a "sloppy butcher", but the vampire was unconcerned; he wasn't at risk.[1] 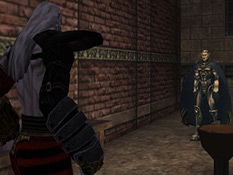 Kain talking to Sebastian in the Lower City of Meridian

Kain then asked if the vampire worked for the Sarafan (the logical conclusion), but the vampire dismissed the suggestion, saying he served no one but himself. He left, and Kain did not meet him again until he ventured into the Industrial Quarter. There Kain would learn that the vampire may not have served the Sarafan per se, who were humans and therefore beneath him, but he certainly served the Sarafan Lord, who knew how to 'value' him, and made it in his interests to do so.[1,2]

Umah told Vorador and the Cabal about the Nexus Stone, the artefact she had seen in the Industrial Quarter before being captured by the Sarafan. Kain went to steal it from the main factory. As he made his way through the Quarter, Vorador contacted him with the Whisper, informing him that another vampire was near. Within the factory complex, Kain saw the vampire he met earlier, giving orders to guards, warning them of his arrival.[3] 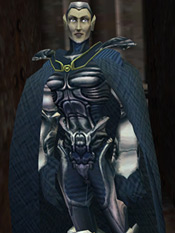 Sebastian had authority within the Industrial Quarter of Meridian

Kain eventually reached the chamber where the Nexus Stone was kept, but the vampire was already there, waiting for him. In the harsh light of the room, Kain finally recognized who he was. It was Sebastian. Sebastian had been part of Kain's army, but discontent to serve while Kain ruled, he had betrayed him. He went to the Sarafan Lord and arranged the ambush that cost Kain the war. Sebastian was looking forward to killing Kain now they had met again.[4]

Kain and Sebastian fought hand-to hand. The room had steam jets that were activated by a human in the control booth. Kain tried to knock Sebastian into the jets, knowing it would burn him. Sebastian endured it for a while before jumping up to the wall, out of Kain's reach. He used his Dark Gift: 'Berserk' to run around the circular room at a great speed, relying on the resultant centrifugal force to keep him on the wall and above the steam (think of the 'Wall of Death' motorcycle stunt). Occasionally, he tried to leap at Kain, but by picking his position carefully, Kain tricked Sebastian into jumping into a column of energy that had formed in the centre of the chamber.

Sebastian finally realized there was a chance he could lose the fight. He commanded the human in the control booth to raise the central platform so he could strike the Nexus Stone. Sebastian wanted to destroy the stone to stop Kain taking it. He also knew that the resulting destruction of the factory would kill them both.[4]

Kain jumped up to the platform before Sebastian could complete his task, and Sebastian jumped down to avoid him. Kain used his Dark Gift: 'Charm' on the human controller to fill the room below him with steam. Sebastian was forced to return to the platform and fight one-on-one with Kain. Kain won, and Sebastian fell into the steam, writhing in agony. The steam cleared, and Kain came off the platform to stand over Sebastian. He wanted answers.

Kain asked about the Nexus Stone's purpose in the Industrial Quarter. Sebastian told him that the portal created by the stone led to the Device. He did not know of the Device's capabilities, only that it would ensure Kain's destruction and allow the Sarafan Lord's rule to be complete.[4]

Kain killed Sebastian, drawing the Dark Gift: 'Berserk' from him by 'absorbing his veins'. Kain then claimed the Nexus Stone for himself.[5]

Sebastian was either sired as a vampire by Vorador, or was otherwise descended from Vorador's bloodline.[6]

There was something that felt a little strange in Kain's interaction with Sebastian. Twice during their meeting, Kain mentioned letting Sebastian live: "I might have spared your life by asking that you join me, but I learned that lesson two hundred years ago", and after their fight: "Speak, and I will spare your life". Sebastian called it a lie - and Kain all but agreed with "Indulge me, then, before you die" - but Kain rarely (if ever) lies in the whole Legacy of Kain series. Could it be, that even after all Sebastian had done, their shared history made Kain a little reluctant to kill him? Somewhere, in his mind, was he still clinging to the idea of the 'glorious destiny' they could have had without Sebastian's betrayal?[4]