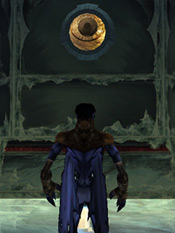 Sentry Eyes or Sentries were wall-mounted anti-intruder devices, used to defend several doorways and important items in Soul Reaver 2. They could be found in the Reaver forges, and in Janos' Retreat, suggesting that they were an invention of the Ancient Vampires.[1,2]

The Sentries were designed to destroy any creature that ventured too close to them. They would issue a warning by glowing a reddish colour as they powered up in preparation for their attack, raining a shower of sparks over the approaching individual. If this warning was ignored, the individual would be killed. Raziel saw a demonstration of the Sentries' power in the Light Forge, when a Thrall was destroyed in front of him. In Raziel's case, a single blast from a Sentry would invariably disintegrate his physical form, and force him back into the Spectral Realm.

The Sentries resembled eyes. The only way to safely approach one was to temporarily 'blind' the eye using a projectile from the Dark Reaver. The eye would roll backwards for a short while; hopefully long enough for Raziel to do whatever he needed to.

The Sentry Eyes were yellow, lending further proof - if any were needed - that they were created by vampires. Yellow or amber-coloured eyes were a characteristic trait of Nosgoth's vampires (Raziel, Kain, Vorador and Janos all had yellow irises), although there were several exceptions to that rule throughout the Legacy of Kain series.