Shades were malicious shadow-creatures that appeared in both Soul Reaver 2 and Defiance. Many Shades inhabited Nosgoth's ancient shrines and forges, although they weren't confined to them. They could be found in most places, occasionally even wandering around outside in the open air. 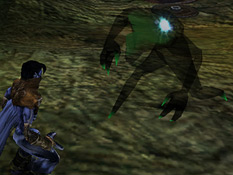 A Shade in Soul Reaver 2

Raziel first encountered Shades when he discovered the Subterranean Ruins in Soul Reaver 2.

The Soul Reaver 2 Shades could fire projectiles at him from a distance. They had no souls; instead they had a glowing ball of energy within them that seemed to give them life. When Raziel defeated a Shade, this energy would flee, and its body shape would be lost.

Shades often guarded Elemental Fonts. They stole the energy from the font and held on to it, allowing it to become their glowing heart. The colour of their bodies depended on the font's elemental affinity, and it was useless until Raziel beat the Shade, freeing the energy again. In the same manner, Shades sometimes blocked doors that Raziel needed to open with the wraith-blade. The lock was inoperable until the stolen energy was returned. 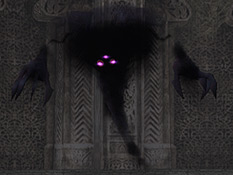 A Greater Shade in Defiance

The Defiance Shades were different from their Soul Reaver 2 counterparts. There were three classes of Shade in that game: Mini, Lesser and Greater Shades.[1]

Mini Shades were spawned from the Dark Reaver when it was fully charged, and Moebius left Kain to fight Lesser Shades after their first Defiance meeting. The more aggressive Greater Shades appeared later, notably in the Oracle's chamber of the Vampire Citadel. They were the largest, strongest and most resilient of their kind. They had three purple 'eyes' compared to the Lesser Shades who only had one.[1]

The Defiance Shades did not steal energy (there wasn't really anywhere to steal from), nor did they use projectiles. They sometimes used combat barriers to force Raziel or Kain into battling them, and the Light Reaver was particularly damaging to them. Notably, Shades assisted the spectre of the original Conflict Guardian in its battle against Raziel.

The Shades nature and origin has been officially explained as follows: they were beings formed from fragments of partially-devoured souls. These fragments, unable to find peace, eventually coalesced and came together to create a Shade. They were therefore soulless, but their 'bodies' were made up of souls/soul energy. This definition suggests their native place was actually the Spectral Realm, although Shades also populated the Material Realm. This was possible because of the weakening of Nosgoth's dimensional barriers, caused by the decline of the Pillars and the Binding.[1,2]