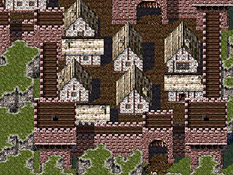 The walled town of Steinchencröe

Steinchencröe was a town Kain visited early in Blood Omen. It was located to the west of Nosgoth, between Nachtholm and Vasserbünde.

Kain avoided Steinchencröe during his mortal life; back then he "would not have graced the place with [his] presence". As a nobleman, the inhabitants with their "infamous aroma" were repulsive to him. However, as a vampire - and still not entirely comfortable with his undead existence - Kain's standards were lower. He no longer felt superior, claiming that his presence "merely added to the stench".[1]