Raziel finds the door to the Subterranean Pillars Chamber and Ruins

After witnessing the corruption of the Pillars of Nosgoth with Kain, Raziel continued beyond them using a stairway only manifesting in the Spectral Realm. He quickly found a large, ancient sealed door, built into a rocky valley wall. The door bore an image of a blue-skinned, winged being - which Raziel identified with - and required the Soul Reaver to open it. Guessing it had been locked for centuries, he unsealed the door and entered the corridor beyond.[1] 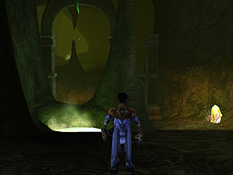 The first part of the Subterranean Ruins

The corridor was the start of a huge underground complex of caves and chambers. Raziel would find that they covered at least the distance between the Pillars and the Termogent Forest Swamp. Raziel encountered Shades for the first time as he descended down slopes and stairs, past craters filled with steaming liquid and large free-standing, glowing golden crystals. It seemed as if the ruins had been carved into a prehistoric sea bed, through layers of fossilised ammonites, as their distinctive swirled shell pattern was evident throughout.

Part way down the initial descent, the rough-hewn environment gave way to the beautifully-preserved splendour of a tiled staircase, going even deeper under a massively-tall ceiling supported with arches. At the bottom, the walls were decorated with images of the Reaver, and there was an opening into a larger, ornate chamber of great significance. 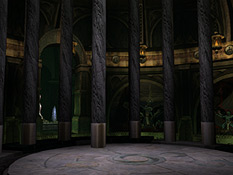 The Subterranean Pillars Chamber, shortly after the Pillars' corruption

The Pillars of Nosgoth did not just extend infinitely upwards into the sky; they also extended infinitely downwards into the earth. The Pillars descended through the platform everyone knew about at ground level, bisecting a second platform in this secret underground chamber. The second platform was marked with elemental symbols (see the Pillars' Platform Diagram page for a detailed analysis of the pattern and its possible meaning).[2] 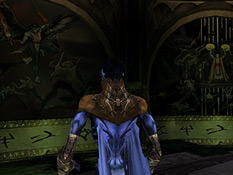 Murals in the Subterranean Pillars Chamber

Raziel could see that the chamber was "clearly built when the Pillars were erected", but he "sensed that it had been sealed for hundreds - perhaps thousands - of years". He believed it was not of human origin. Murals on the wall depicted a blue-skinned winged race warring with their adversaries, raising the Pillars and also "afflicted with the same blood-thirst [Raziel] had so recently suffered" (as a vampire). The Reaver was shown prominently as well. These findings put Raziel on the path to learning about the Ancient Vampires and the Hylden. Previously, he hadn't even known either race existed.[3]

Raziel's thoughts were interrupted by the Elder God, who dismissed his unspoken discoveries as "lies". Peering over the edge of the underground Pillars platform, Raziel saw the Elder in the water-filled space beneath; its tentacles wrapped around the descending Pillars. The Elder had previously told Raziel that he would be beyond its influence after stepping through the Chronoplast's portal. Raziel wasn't prepared to blindly follow its direction any more, and his lack of respect was obvious in their conversation. Afterwards, Raziel jumped into the water, swimming past the Elder God into the adjacent flooded caverns.[3,4] 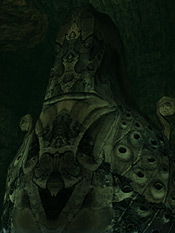 This huge statue is a symbolic representation of the Elder God

The following caverns seemed mostly natural, with only a few artificial installations, for example: Elemental Fonts. Again, Raziel fought Shades and more glowing crystals lit his route to where he could finally emerge from the ruins into the Termogent Forest Swamp. Raziel travelled through the Subterranean Ruins several times in Soul Reaver 2 and in a total of three different time periods. The ruins did not change much, except for the water level increasing or receding. Raziel had to adapt his route slightly as a consequence, and rely on his Elemental Reavers to get through when swimming wasn't an option. Once demons started confronting Raziel, they could attack him in the ruins just as easily as anywhere else.

The huge statue which Raziel climbed up or swam past was 'a symbolic representation of the Elder God fashioned by an ancient, primitive cult'.[5]

In the time period after Kain refused to sacrifice himself, Raziel noted that the Subterranean Pillars Chamber had suffered damage. The Pillars were broken as per their counterparts at ground level, but Raziel commented on the "guilty scene" of the Elder growing up through the chamber, obliterating the room's murals and looking like it had "torn down the Pillars single-handedly", coiled around their shattered remains.[6]

We have an explanation for the huge statue in the ruins, but it was given before the release of Defiance. We now know that the Ancient Vampires were worshippers of the Elder, and as their works exist in the ruins already, we can probably assume the 'primitive cult' had some connection to them. Alternatively, the statue might even predate their adoption of that faith. Some thoughts: could it be said that - even being symbolic - the statue had an element of accuracy that suggested the Elder had been seen by someone, despite it generally be invisible to all but Raziel? Is it a co-incidence that the Elder God's apparent point of origin in Soul Reaver 2 is the same as the Pillars' and both are so close to the statue?[5,7]

As Raziel had no inkling of the ruins' existence until he found them in Soul Reaver 2, the Subterranean Ruins and the Pillars Chamber apparently remained undiscovered during the construction of the Sanctuary of the Clans.