The town of Vasserbünde with Nupraptor's Retreat in the background 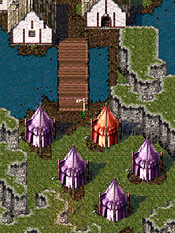 The gypsy camp south of Vasserbünde

Vasserbünde featured in Blood Omen. It was a large settlement located just to the east of Nupraptor's Retreat. Kain commented that its past glory was "now stained and faded". It had a few businesses. These were Capt'n Bitter's Sudz (a tavern), the Chopping Block (a butcher shop), and the Village Smithy.[1]

The townspeople regarded Nupraptor as a lunatic, but they appeared to fear his magic. They had stories to tell about pilgrims who went into Nupraptor's Retreat, never to return, and Nupraptor's terrified servants.[2,3,4]

To the south of Vasserbünde, Kain encountered a gypsy camp, the first of many in that game. He remarked that the gypsies were not to be trusted completely - saying "most of their babble should be taken with a pinch of salt" - but they occasionally had information that was useful. The Vasserbünde camp did have something else of worth besides their rumours and superstition. One tent held Kain's Disguise Form. Once he acquired this, he could make himself appear like a human peasant. The form prevented him being attacked, and allowed him to converse with people.[5]

In 2010, years after Blood Omen's release in 1996, a unreachable secret area was discovered in that game. It was found by fans working on the Blood Omnicide

The secret area can be accessed from Capt'n Bitter's Sudz in Vasserbünde, using cheats applied to the PC version of Blood Omen. The area contains the HCMS Bitter, a pirate ship! See the Blood Omen: HMCS Bitter page

at The Lost Worlds for more details.[7]