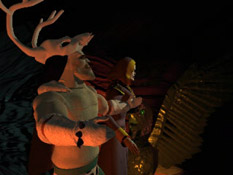 Bane and DeJoule attempting to escape from Kain

Bane the Druid was the Guardian of the Pillar of Nature - one of the Circle of Nine - in Blood Omen. He dressed in animal skins and his power was connected to all things natural: plants and creatures, and even the weather. He was able to 'change the nature of life itself, animating plants and influencing animals, creating new and weird life forms for his own purposes'.[1]

Like his fellow Guardians, Bane had been afflicted with madness by Nupraptor's grief-fuelled mental attack. In his insanity, Bane used his magic to devastating effect. He allied with DeJoule and Anarcrothe to create decidedly unnatural beings in an area in northern Nosgoth. The area was known as 'Dark Eden'. Their combined sorcery spewed in a dome from the apex of a tower in Dark Eden, and rained down onto the region.[2,3] 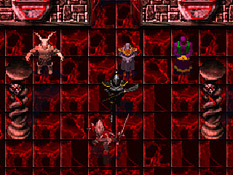 Kain found Bane standing with the others in the tower. Bane acknowledged Kain, saying: "So, the scourge of the Circle has arrived". He and the others must have heard of Kain's quest to kill the Circle of Nine, and his murder of Nupraptor. Anarcrothe summoned Malek and fled. Kain called upon Vorador, then he pursued Bane and DeJoule as they also tried to escape. He confronted them both outside.[3]

The fight took place in the open air, in an area containing water and earth. Bane declared Kain was "an affront to Nature itself", and that it was the duty of Bane and DeJoule to "purify him". Bane used the outdoors location to his advantage, stripping away pieces of the ground to reveal the water beneath. The process made it difficult for Kain to battle. He had to catch Bane to strike him, but he had to avoid the deadly water traps that the druid was laying for him. When Kain killed Bane, he collected his broken antler headdress (damaged in the fight) to repair the Pillar of Nature.[3]

At some point during the development of Blood Omen, Bane was going to be named 'Orzach'. He was also going to be an 'Ecomancer', rather than a Druid.[4]