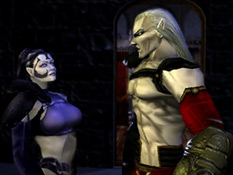 Some time after Kain refused to repair the Pillar of Balance, he set about amassing a vampire army to seize control of the land (at the best guess, it was about a century after Blood Omen). It seemed he had not yet discovered the means to raise vampires himself, so he relied on Vorador (who was inexplicably alive again in this era) to sire fledglings for his ranks. Over time, his army marched south from the Pillars, and took Freeport and Provance. Unfortunately Kain's success did not last.

Two hundred years after his refusal at the Pillars, Kain's army was defeated outside of Meridian. The reformed Sarafan Order, under the command of the Sarafan Lord, decimated Kain's forces with Glyph Magic. Kain himself was beaten in combat by the Sarafan Lord, and was widely believed to be dead. However, he survived - just barely - and was cared for by the vampires who would later form the Cabal.

Two centuries later (and still one hundred years before Raziel's vampiric rebirth), Kain awoke from his injury-induced slumber. He was in Meridian, and the vampire Umah was watching over him. She told him where he was, and what had become of the vampires under the Sarafan Lord's rule. Umah and the Cabal hoped to overthrow the Sarafan with Kain's help. Kain was eager to take his revenge on the Sarafan Lord, but he had lost most of his power and abilities during his brush with true death. His memory was fragmented, and the Sarafan Lord had the Soul Reaver. 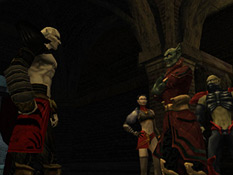 Kain and the Cabal

Umah retrained Kain in the Slums, then he fought and killed Faustus in the Den. Eventually he met Vorador in Sanctuary. Kain loosely allied with the Cabal, accepting Vorador's guidance, but fully intending to follow his own agenda. Upon hearing Umah had been captured, he visited the Upper City to see the Bishop of Meridian, and killed Marcus while he was there. He then rescued Umah from the Sarafan Keep, showing uncharacteristic concern for her injuries.

Safely back in Sanctuary, Umah told Kain and Vorador about the Nexus Stone. She had seen it in the Industrial Quarter before her capture. Kain learned that the artefact could protect its wearer against the Soul Reaver. He went to the Industrial Quarter to steal it, but he had to get past Sebastian. Sebastian told Kain about the Device before he died, so Kain visited the Seer to find out more about it. She teleported him to the Device when the Sarafan Lord arrived unexpectedly, and set fire to her home.

Destroying the Device temporarily became Kain's priority. He met the Beast, and on its advice, Kain visited the Eternal Prison and drank the blood of the Builder. He also encountered Magnus, his former champion. Kain used the Builder's blood to poison the Mass: the living heart of the Device. As the Mass perished, the Beast was able to regain his natural form: that of the winged Ancient Vampire, Janos Audron. Kain and Janos spoke at length about the Hylden, the Sarafan Lord, and Kain's role in their return to Nosgoth. When Kain failed to sacrifice himself in Blood Omen, his decision had "caused a rift throughout the world, sufficient to breach through the dimensions." The Sarafan Lord, a Hylden, had been able to re-enter Nosgoth from the Demon Realm.

Janos and Kain returned to Sanctuary together, and a plan was formed to find and close the Hylden Gate. Against Kain's wishes, Umah accompanied him to the Wharves. Kain's doubts had merit. Umah stole the Nexus Stone from him. She believed that he would betray the vampires of the Cabal, and kill them to ensure his rule in Nosgoth would be unquestioned. Kain threatened her - clearly surprised and enraged by her actions - and she teleported away. When he caught up with her again she was badly wounded and close to death. His anger had abated, but he knew the bond of trust between them was irreparable. Ignoring her pleas for help, Kain killed her. As she died, he expressed some regret that this had happened, that she had forced him into it. In his words, she could have been his queen.

Kain continued to the Hylden City. He was joined by Janos and Vorador once he had destroyed the city's magical shield. Kain was arguing with Vorador about the circumstances of Umah's death when the Sarafan Lord appeared. The Lord injured Vorador, so Kain was forced to go to the Hylden Gate alone. 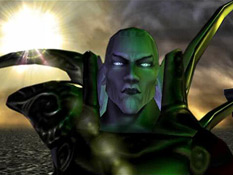 Kain, ready for the dawn of his empire

Kain fought with the Sarafan Lord above the Hylden Gate. Kain used the Nexus Stone to guard himself against the Soul Reaver, but he was faced with a stalemate. He needed to throw the stone into the Hylden Gate in order to destroy it. Kain chose to discard the stone's protection, ensuring that the Sarafan Lord would die, no matter who won their battle.

Eventually the Sarafan Lord dropped the Soul Reaver. Janos intervened, distracting the Lord long enough for Kain to pick it up. The Sarafan Lord threw Janos through the closing gate, then turned his attention back to Kain. The structure of walkways above the gate was nearing total collapse, but on what remained, Kain defeated the Sarafan Lord, and killed him with the Soul Reaver. As he left the destroyed Hylden Gate, he considered the future. He was now ready to establish his empire - the empire we saw in Legacy of Kain: Soul Reaver.

Defiance returned to the story of the older Kain, and what happened following the events of Soul Reaver 2. Raziel faded into the Spectral Realm after he was almost devoured by the Reaver. Remaining in that era, five centuries before the events of Blood Omen, Kain kept the sword, and tried to find out where Raziel had gone. When he was unsuccessful, he returned to the Sarafan Stronghold to get answers from Moebius. He soon found the Time Streamer, but Moebius used his staff to incapacitate Kain. Mocking him, Moebius claimed that Kain's "messianic delusions" - his belief that he was the Scion of Balance mentioned in the Ancients' prophecies - had blinded him to "Raziel's true nature". 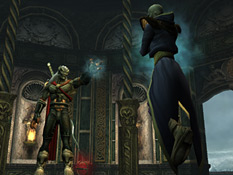 Kain telekinetically strangles Moebius to get answers from him

Moebius departed, insultingly leaving Kain armed with the Reaver, but unable to move until he was safely out of the way. Of course, Kain tracked him down again, and in the Stronghold's tower, he telekinetically wrenched the staff away from the Time Streamer before it could be used against him. He used his telekinesis to half-throttle Moebius, and managed to learn about a place west of the Pillars that would interest him. Moebius also said that Raziel was "contained", free-willed but certainly going to kill Kain, and far more dangerous than Kain realized. Kain visited the Pillars, and uncovered the Vampire Citadel that Moebius had spoken of. It was in a lake (likely the Lake of Tears), hidden by mist. 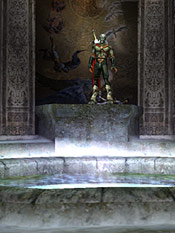 Kain finds the Oracle of the Ancient Vampires

Arriving at the Citadel in Bat Form, Kain commented that Moebius had done him a service in telling him of the place's existence. It gave him the opportunity to learn more about his destiny as the Scion of Balance. Exploring the Citadel and Reaver forges, Kain discovered murals that depicted two champions: one resembling an Ancient Vampire, the other Hylden. One champion would inevitably fall. Another mural told the story of the human Guardians' revolt against the Ancient Vampires, led by Moebius and Mortanius, and in a sealed chamber at the heart of the Citadel, he found the Ancient Vampires' Oracle. This Oracle - in fact the Elder God - told Kain that Raziel was five hundred years ahead of Kain in time, and that he was trying to resurrect Janos Audron. Clearly Raziel had not heard (or otherwise not heeded) Kain's warning in Soul Reaver 2 that Janos must stay dead. The Oracle transported Kain to the era inhabited by Raziel - the Blood Omen era - with a warning that Raziel saw Kain as an enemy, even if Kain didn't consider Raziel to be his.

Kain turned up at Avernus Cathedral just as Raziel emerged from the Avernus Catacombs portal. Raziel had also learned about the Vampire and Hylden champions, and he had come to the conclusion that he was likely the Hylden one. He had recently devoured Turel's soul, and he appeared to be influenced in a limited way by the Hylden; they were fuelling his rage, so he would not listen to Kain's attempts to reason with him. Most importantly, however, Raziel had discovered that the Heart of Darkness, which he wanted so desperately to restore Janos, was inside Kain, and always had been. Mortanius had eventually realized his mistake in turning on the Ancient Vampires, and found out that the Pillars were holding something back that was far worse: the Hylden. In an act of atonement, he had used the Heart of Darkness to resurrect the nobleman Kain as a vampire, intending to create the champion foretold by the Ancients, destined to destroy the Hylden champion, and return the Pillars to Vampire rule. He believed Kain would restore Balance to Nosgoth.